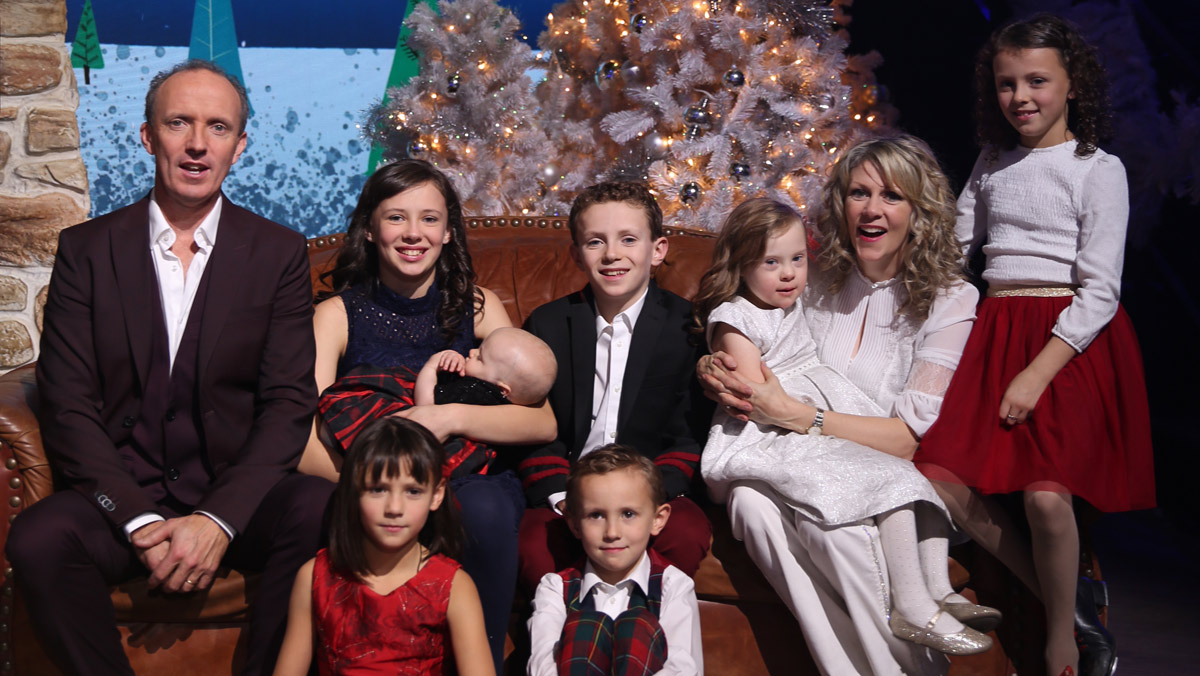 A major highlight of VisionTV’s 5 Weeks of Christmas this year is the one-of-a-kind musical event special “A Celtic Family Christmas”. Starring acclaimed Canadian Celtic music superstars Natalie MacMaster and Donnell Leahy and their seven talented children, it’s a spectacular hour filled with song, dance, and seasonal surprises for the whole family to enjoy.

How has the live performance of A Celtic Family Christmas changed over the past 6 years? What can fans expect from this year’s live show?
Natalie: “Well that’s a great question because I guess it has been that long since we’ve officially titled it that, but let it be known that myself and Donnell, both together and independently of one another, have been doing Christmas shows for a good 20 years. So there are elements of the past 20 years still in the show that exists today. For example, the Christmas medley. I’ve always had a Christmas medley in my Christmas show. It’s evolved over the years and the tunes have changed within it, but the idea is the same. Also, what’s been the same has been incorporating some traditional pieces that are probably more a part of our Christmas memories than Christmas songs, and that’s because of the nature of the instrument we play.”
“But as far as what’s changed, I guess we’re always trying to give people a bigger, broader sense of what we come from, what our traditions are, and always add a more theatrical component to the show. And we explore that much more richly this time by adding an actor to the show who plays a couple of roles. One is a “Seanchai”, which is a storyteller. Another is the guise of an uncle, a favourite uncle. Everyone’s favourite uncle. And there’s a bit of magic there that everyone sees their favourite uncle. And through him, he tells the story of myself and Donnell, our ancestors, how the music made it to Canada, why we play the music we play, why we pass it on, and all those really good things. And with a bit of humour along the way. It’s told in a lighthearted way, but it’s touching at the same time.”

With so many great Christmas songs to choose from, how did you approach the selection process for your album A Celtic Family Christmas and your live performances?
Natalie: “We really base our live performances on flow. It’s not so much the piece of music, although if there’s something really just over-the-top amazing, we built the show around that, so to speak. But our first interest is creating the mood of the show and the flow. And sometimes we have a great piece of music. I’ve got probably 5 or 6 awesome slow pieces, but you can’t have a whole night of slow music. So they just don’t make it. I just end up using one slow piece. And there’s a couple of other tunes I can think of that just didn’t quite make it into the show. One is a beautiful rendition of Silent Night, one of the few vocals we have, sung in both Gaelic and English and it’s actually not in the show as beautiful as it is. It just disrupts the flow, so we have to keep what we think is the right piece of music for the moods that we want to create. We want to uplift people.”
“As far as picking pieces for the Christmas CD, we tried a whole bunch of different ones. When you’re an instrumentalist, you lose that whole vocal component, so it has to have a really strong melody or rhythm within the piece for it to translate. So the ones we picked were ones we felt were really strong.”

Since it’s baby Maria’s first Christmas, what are the most important family traditions you’re looking forward to teaching her?
Natalie: “I don’t think there’s any surprise, generally speaking, about what happens at Christmas for most people. People who celebrate Christmas usually have some type of faith background, and so we have that. In fact we have a very strong faith background, so we’ll teach her about the birth of Jesus. There will be knickknacks, like a nativity, and different crafts that we do around the house that she will see and she will know it’s a special time of year for our faith. She’ll also see that during Christmas we make time for each other and hang out more, get together more, so there’s a lot of parties that usually take place during that time, and she’ll be in on all those. We have a few little traditions. We do some family baking, put it in the freezer. It’s usually eaten up before Christmas starts, but anyway, we’ll try it again this year.”

You share your heritage with fans by inviting them to submit recipes on your website. Is there a particular dish or dessert that’s essential to make around Christmas time?
Natalie: “Everybody loves scalloped potatoes and ham here, so we’ll probably make that our Christmas dinner. It usually ends up being our Easter dinner and our Christmas dinner. The kids also love, and we tend to just make it at Christmas time, it’s called toffee. It’s just basically equal parts butter and white sugar. You boil it until it turns into the colour of a brown paper bag and spill it onto a cookie sheet. And it’s kind of like Skor bar. You can sprinkle that with chocolate on top while it’s still warm so that the chocolate can melt. And you can sprinkle nuts on that too, if you want. Another thing that we make are the coconut balls that my mum always used to make at Christmas time growing up. And it’s just coconut, Carnation milk, butter, icing sugar in the center. You freeze those balls then you dip them in chocolate.”

The “A Celtic Family Christmas” TV special features guest performances by Jackie Evancho and Shawn Hook. What does it mean to you to share the stage with rising talents like Jackie and Shawn?
Natalie: “Well you know, I look at the days when I was given many opportunities through the Chieftains, through Alison Krauss, through Faith Hill and Carlos Santana and all these collaborations I did, and being a part of other people’s shows was always a big highlight. That’s where you get to new fans. People who would’ve never heard of me all of a sudden hear of me. And I still to this day have people come say to me “We saw you 25 years ago at the Celtic Fiddle Festival Tour. You were 16 years old and you were playing for the Chieftains.” You know, these sort of things. So I still hear about that. So for Shawn and Jackie, for sure we want to have special guests. We like changing things up and they’re young, energetic, upcoming, and they need an audience. And we understand that. They’re great talents. And so it’s nice to, it’s imperative actually, that we take those opportunities to unite forces.”