Getting Social with Call the Midwife and its Fans!

As season five of “Call the Midwife” commences, viewers are introduced to a new-and-improved Trixie Franklin. After coming to terms with her alcoholism at the end of season four, Trixie has turned to physical fitness as a means to not only cope, but also feel empowered. In fact, she manages to encourage others from Nonnatus House to join her for calesthenics.

“We absolutely loved it,” commented Emerald Fennell (Patsy Mount) during an interview with Express when discussing the fitness scenes various cast members participated in. “Because we have so much stuff that’s very serious and poignant, those scenes when we’re all just together having a jolly are really great.”

“Trixie goes the way of a lot of addicts, from one thing to another, almost to the point of obsession,” added Helen George (Trixie Franklin). “But the bigger story is about celebrating the female form in every shape and size that it comes in. It’s about independence for women this series and about women finding their voice.” 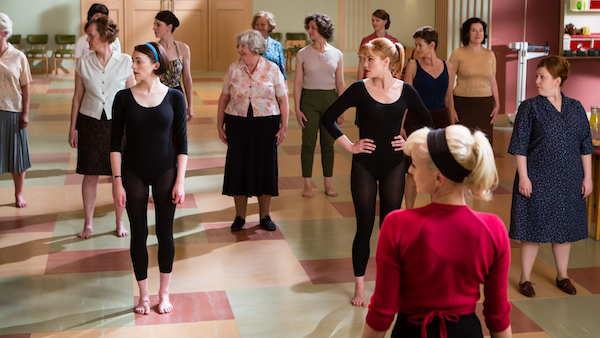 To get into the spirit of a new season of “Call the Midwife,” we thought it’d be fun to share with you some of the best show-related Twitter posts shared by the series, its stars, as well as fans.

This week on “Call the Midwife” (Wednesday, November 16 at 9pm ET/6pm PT),  When a baby is born with severe deformities, the midwives find it difficult to handle the situation, and the baby’s father even more so. Trixie’s new sideline as a keep fit instructor brings her into conflict with Sister Julienne, and she also becomes suspicious of the relationship between Barbara and Tom.

The real McCoy – filming outside the original "Nonnatus House" in Poplar this morning 🙂 #callthemidwife pic.twitter.com/pAbF2GWYTf

This is the face of a woman who is about to purchase a book of magic tricks on the internet at 2am. pic.twitter.com/U3jxI1gV4f

Thank you @baileyballoons for a great flight this morn bath has never looked so beautiful x pic.twitter.com/xJsfyGgbdk

Nothing says Christmas quite like a light-up Troll…. pic.twitter.com/0Jo20ggR8b

"Why are you all laughing at my hair?" #PeggyandMe pic.twitter.com/Bdkki7QLiu