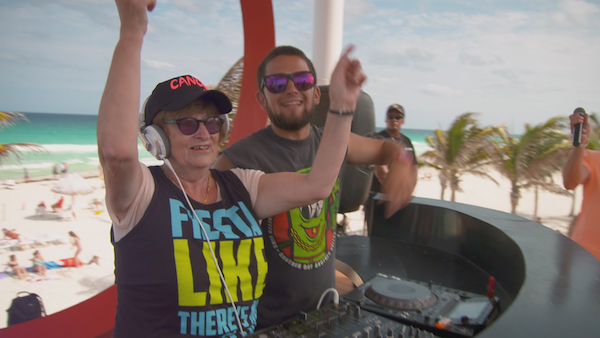 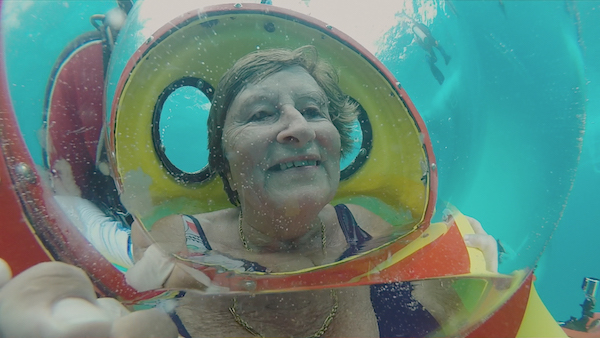 Zipping through the skies of Mexico City in a helicopter, Nancy gets her first look at a region with an infectious culture, environmental rarities, hot foods, party people and a little criminality here and there. With their trip to Mexico happening, Baz doesn’t just have Nancy out of her element – he has her set up to revisit several fears and further expand her boundaries.

Back on the ground, Baz takes Nancy to a Mexican flea market with the hopes of helping her get into the spirit of the region. During this experience, Baz comes across an outdoor eatery where local cuisine is featured. One item on the menu in particular leaps out at him: chilli peppers. Uninterested in feeling the burn, Nancy quickly opts out of a challenge from Baz to eat one. He, however, is willing to join a local man for a bite.

At first, Baz doesn’t seem overly affected, but then the spice kicks in. Having just eaten a good chunk of the world’s fourth hottest chilli pepper, Baz begins to melt. Sweat starts rolling, but his brave face stays intact in front of fellow diners. In private, though, he agonizes over what he just ate. Nancy, to her credit, reminds him just how painful his next bathroom visit may be.

Shortly after Baz cools down, he begins to drive Nancy to Cancun – with the help of an entire Mariachi band playing songs in the backseat. Nancy, tried to be polite throughout this, but Baz could tell she was irritated: “That face [of hers] could curdle a Pina colada.”

In Cancun, Baz brings Nancy to the ocean for a new stunt designed to help her (again) get past one of her biggest fears: going under water. Following a bumpy boat ride a mile offshore, Nancy is introduced to a B.O.B. (a breathing observation bubble). This interesting contraption will allow her to go as far as 18 metres underwater without getting her face submerged in water and without having to use an uncomfortable breathing apparatus. (Think of it like wearing a giant bubble over your head.) 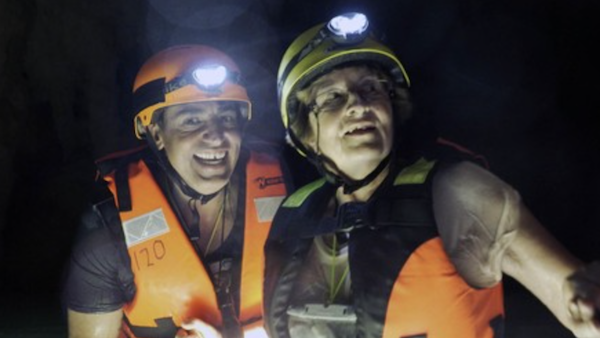 As per usual, Nancy stresses out over this incredible invention…until she gets into it, in the water. Once there, Baz and Nancy go deep and bear witness to lots of turtles and fish. The whole time, Nancy’s smile shines brightly and excitedly. Back in the boat, Nancy’s enthusiasm is not containable and she can’t help but continually thank the staff for providing her with such an excellent time.

While Nancy may have felt more comfortable than expected underwater, she was certainly not comfortable with the idea of illegally spray-painting some graffiti on a neighbourhood building. But, Baz committed her to this and once nightfall hit, the duo was joined by a pair of local artists hoping to teach Nancy their art…and not get her arrested.

To Baz’s surprise, they were not whisked away to some dark, hidden and forbidden alleyway for this event. Rather, they remained exposed on a busy street corner as cars and civilians filled the area. Somehow, Baz became more on edge about getting caught, as Nancy relaxingly helped the artists spray-paint “Mammy” on the wall. But, a nearby car accident and the promise of looming police presence cut short this artistic endeavour.

After a day spent dressing up and dancing with locals, Baz and Nancy went back underground to a geological phenomena known as a Cenote, a “natural pit, or sinkhole, resulting from the collapse of limestone bedrock that exposes groundwater underneath.”

Again surrounded by water, Nancy is unfazed. Yes, the water is cold, but she’s certainly not out of her depth. As she falls in love with this glorious setting, Baz begins to get anxious after an enormous community of bats show themselves. Clearly, they had to leave.

Going for the fish out of water effect, Nancy’s final Mexican mission is to learn how to be a D.J. and serve up some entertainment for a bunch of young folks visiting Cancun on spring break. Initially a little taken aback by all of the tech toys involved in making a performance happen, Nancy soon becomes engaged in the process, especially when it comes to learning how to keep a crowd engaged.

Following a speedy lesson, Nancy is brought to the beach as a large amount of revelers congregate on the sand. Joined by a seasoned professional, Nancy takes the D.J. booth by storm. She gets the tunes pumping and the crowd stimulated, including her son Baz, who is quite possibly more thrilled with how this stunt turned out than any other attempted thus far.

Monday, November 14 (8pm ET/5pm PT) on “50 Ways to Kill Your Mammy,” Baz and Nancy visit Texas for a wild monster truck ride and a high-flying stunt not for the faint of heart.