The Crimson Field Question from the Front S1E1: Which Nurse Will Rise Above? 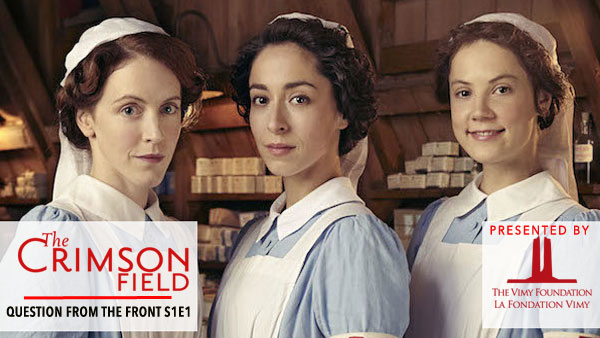 Welcome to this week’s “The Crimson Field” Question from the Front! Before reading and participating in the poll, do note that there are many spoilers ahead.

War is not a situation in which you can walk into and expect to know how each day will play out. For volunteer nurses Kitty Tiernan (Oona Chaplin), Flora Marshall (Alice St. Clair) and Rosalie Berwick (Marianne Oldham), leaving their normal lives behind for a World War 1 field hospital in France has proven to be an immediate and swift shock to their systems.

It’s quickly clear that Kitty, Flora and Rosalie are far from being cut from the same cloth. Kitty is thoughtfully rebellious and unafraid to offer a counter-opinion. Flora, meanwhile, comes from upper class society and initially struggles to adapt to the strict, level playing pushed by her commanders. Rosalie, however, plays by the rules and is certainly the much quieter, proper member of the trio.

Directly supervising them is Matron Grace Carter (Hermione Norris), a no-nonsense individual that’s fearlessly strict and has little patience with regards to anyone under her colouring outside the lines. 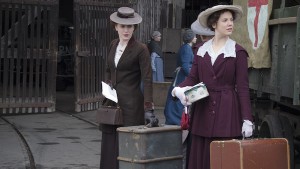 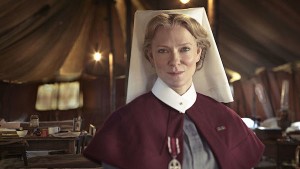 Upon encountering Kitty, Flora and Rosalie, Matron Grace lays down the law immediately, lecturing the nurses on the importance of not doing anything aesthetically pleasing that may appeal to male patients; understanding how to properly make a bed in two minutes or less; and letting them know that the bathroom can be visited by retrieving a chamber pot.

At the outset, Rosalie easily abides but Flora’s over-the-top outgoing manner and Kitty’s under-the-breath comments help them draw immediate ire from Matron Grace. For instance, when Flora brags about her bandaging skills, Matron Grace pulls her away from the group and makes her clean up a massive collection of bloodied, discarded bandages. All is well and good until she discovers a couple of errant toes.

After a minor blowout with Rosalie during bed making, Kitty leaves the tent to clear her head. Soon after lighting up a cigarette, a battered and bruised soldier asks Kitty if she’d share. She obliges, only to be caught by a soon-to-be thoroughly upset Matron Grace. 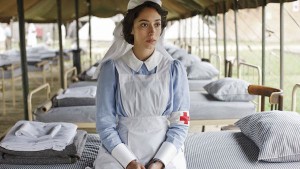 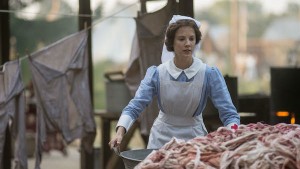 Matron Grace: “You’ve disobeyed an order. You were told to make the beds in the new ward tents.”

Kitty: “I needed some fresh air.”

Matron Grace: “You disobeyed an order.”

Kitty: “For a moment, yes. But, the soldier asked me for a cigarette.”

Matron Grace: “You should’ve asked an orderly to help and returned immediately to the task that you were given.”

Kitty: “I thought it was more important to help the soldier.”

Matron Grace: “You thought that was more important than my order?”

Matron Grace: “Then you will be reprimanded in the strongest possible terms.”

Kitty: “For helping a man to smoke a cigarette? He asked me for help. Was I supposed to walk away?” 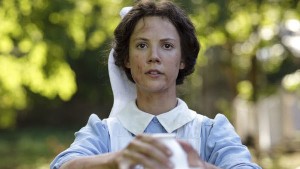 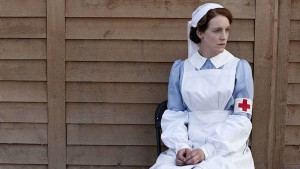 After further heated words between the two – which included Kitty striking an emotional nerve in Matron Grace regarding her own disciplinary motivations – Matron Grace decided to send Kitty back home.

On the morning of Kitty’s departure, she is soon violently confronted by a soldier that’s snuck out of his bed and is ready to kill her if she doesn’t help him. She soon disarms the soldier by encouraging him to go ahead and take her life. Quickly thereafter, he breaks down in tears, aware that he’s nearing the end.

After the soldier decides to finally rest and live out his final few moments on earth peacefully with Kitty holding his hand, Matron Grace approaches. Upon discovering Kitty’s reason for not leaving as instructed, Matron Grace appears to see Kitty in a different, more compassionate light. Perhaps, a better understanding will soon come about.

Regardless, it’s likely that Kitty, Flora and Rosalie will struggle to fully find their footing in this tumultuous situation. Even if that’s the case, which nurse do you think will prove to be the one that stand head and shoulders above the rest?

Click here to learn more about the terrific characters from The Crimson Field!