The Value of Communication: Setting the Scene for Home Fires Episode 5 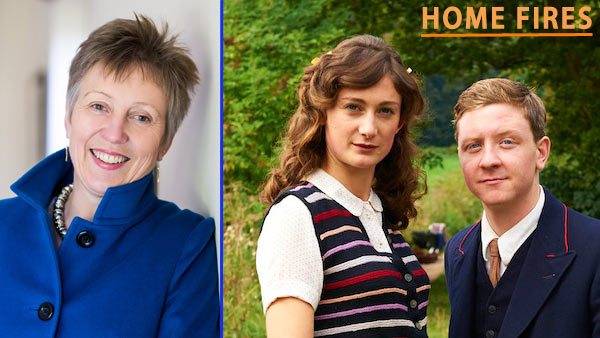 I’ve always been fascinated by communication. Not just in its literal form but in what it says about the human condition and how important it is to people to communicate and be communicated with. Throughout my many years of research into the history of the Second World War I have been struck by how much of a difference it made if people could talk to one another, if not face to face then by letter. In fact, sometimes it was enough just to write the letter, as it was in the case of one of the soldiers I wrote about who was a prisoner of the Japanese for 3 ½ years. In February 1942 he wrote to his wife: I am a Prisoner of War. The letter goes on to describe the fall of Singapore and then he wrote the following:

“We are going to be linked together through the medium of pen and ink and pencil and paper as we always have been; we are going to continue to put our thoughts on paper. So long as I am able, I am going to write you at least one letter each week. One day you will read these letters … And know without doubt that you are with me … now and always.”

Charles Steel wrote 182 letters to his wife, Louise, over the period of his captivity but he could only send them to her when he was finally freed in August 1945. He posted them from Rangoon in September and soon received his first letter from her expressing anxiety about how difficult it would be for them to reconnect after so much time apart. He replied:

‘To hear you talking about cooking for the family is as balm to my soul. . . I am sure that we shall come together quite naturally because I see, quite clearly, a scene in our garden in forty years’ time. You will be reading these letters and I shall be gardening, and I shall come over to you with the loveliest rose I can find. As I pin it to your shawl, I can see you look up and hear you say, ‘Darling, what silly children we were to think that a mere war would alter our love for each other!’ And I shall kiss you, because I shall still love you . . .” 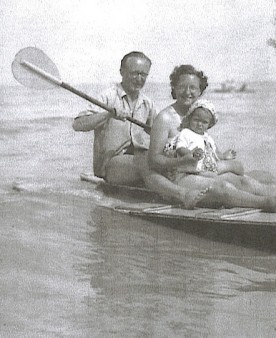 Charles and Louise Steel  did indeed come together and were married for over forty years. Margaret, born after the war, is photographed here with them on holiday.

Today we can communicate a hundred times a day in so many different ways: email, Twitter, Facebook and a dozen other ways I probably don’t know about because I was born into the generation that sent postcards from holiday and rang home once a week from school. In 1940, the postman delivered letters twice, even three times a day. Telegrams were for urgent news, both good and bad, and by the outbreak of war the telephone was becoming more widely used. My mother-in-law, who grew up in the 1930s, recalled her terror of the telephone. It stood in the hall in her parents’ home, a black Bakelite candlestick phone dating from the 1920s, with its loud, insistent ring. She would hide from it rather than answer it. Not everyone was as shy of the telephone as she was but neither did every household have one. We see Bob Simms going out to the phone box to call his editor in Home Fires, only to discover his wife, Pat, on the other end of the telephone in the exchange.

But the bulk of wartime correspondence was by letter and the quantity prodigious. In the six years of war the army postal service handled thousands of millions of letters and parcels to and from conflict zones throughout the world. In every diary written during the war there are references to the arrival or non-arrival of the post. Crushing disappointment when nothing came, euphoria at the delivery of a letter from a loved one. And at home the post was just as eagerly awaited. ‘No letter from Jack this week’ or ‘I am sure you have written but I haven’t received any letters from you for a fortnight and I do so worry when I don’t hear from you.’ But ‘bliss oh bliss! Four letters in one day. I jumped into bed, pulled the covers up to my nose and breathed in your news.’ The value of postal communication and exchange of information between servicemen and women and their families is hard to overestimate.
‘Letters for us stand for love, longing, light-heartedness and lyricism. Letters evoke passion, tenderness, amusement, sadness, rejoicing, surprise.’ These words were written by Diana Hopkinson. As a deaf woman she was particularly lonely without him. She and her husband corresponded for over five years, the words on paper giving meaning to her life without him. While she was stirring the jam or playing with the baby, washing her clothes or mending their shoes, the letters, full of love and passion, humour and tales of far-away places she would never visit but in her mind’s eye, filled her thoughts and kept her going throughout the war.

One very special set of letters came to my notice when I was writing the chapter in my book When the Children Came Home. This was correspondence between families separated by the Atlantic ocean. In 1940 Sherborne School in Dorset sent 125 girls aged between six and sixteen to Branksome Hall School in Toronto. For some this was the opportunity of a lifetime, for others it was less happy as they missed their families, but for all it meant that the only form of communication was the letter. Sandra B had been a teenager when she arrived in Toronto. She wrote: ‘My family were most supportive. They had written twice a week. I had written home without constraint, and I felt that they had kept pace with the ways I was changing: they had both been to North America and were well travelled.’ Coming home, however, was difficult and she found Britain changed. Canada was where her heart was and she returned in 1947, marrying a Canadian boy the following year. She went on: ‘I consider myself Canadian, British Columbian, but my roots are still British. My mother, brother’s family, aunt, husband’s family are still there. In retrospect I feel I had the best of both worlds and was exceptionally lucky to come to Canada. Because of the age I came out, I do not feel that I was adversely affected; maybe my attitudes were already formed. I feel it made me more self reliant.’ Undoubtedly, in her mind, the ability to communicate openly with her parents had given her the courage to do what she felt was right for her.

While most people had friends, lovers, husbands or wives, mothers and fathers, aunts or grandparents who would write to them, there were a significant number of men in the armed forces who had no correspondence to look forward to. Their families might be illiterate: illiteracy was still a significant problem in Britain in the 1930s. They might simply have no family. An army officer had seen first-hand the importance of letters during the First World War and he determined that no soldier, sailor or airman should be without post. He was the honorary secretary of the British and Allied Comforts and Victims of War Fund. This organisation provided comforts for ‘Friendless Serving Men’ including letters and parcels, which were so helpful in raising these men’s spirits.

The Women’s Institute rallied behind the cause and soon were receiving so many thank-you letters from the so-called ‘Friendless Men’ that they had to set aside time in their busy meetings to read them. Communication was never more important. You will see this played out in Home Fires as Miriam takes it upon herself to write to young men who have no other correspondents to rely on.

Next week is my final blog for Series 1 of Home Fires. I shall be writing a whole new blog especially for Canada, to celebrate the fact that the birth of the drama series has its oldest roots in Stoney Creek of 1897.

er, Broadcaster and Historian Julie Summers is the author of Jambusters, the true story of the wartime Women’s Institute which inspired the hit ITV series, Home Fires, premiering on VisionTV Wednesdays at 9pm ET/6pm PT through March 9, 2016. Julie is also the author of Fashion on the Ration, exploring style during the Second World War.