Songs of Freedom: Let the Music Bring You Home

In the fourth and final episode of Songs of Freedom, Brueggergosman becomes further educated about the hard truths of slavery during her journey through Cameroon, all the while embracing and sharing time with local singers and dancers. The world famous vocalist also takes a number of freedom songs to new heights back home in Nova Scotia.

Right off the top, Brueggergosman tackles “I Surrender All,” a song in which she delivers with an emotional and spiritual force that can’t help but be felt deeply by the viewer.

Appearing more than comfortable, Brueggergosman performs “I Surrender All” with the powerful and charismatic Nova Scotia Mass Choir. The performance is so profound, at least one choir member can’t help but find tears in her eyes upon the song’s completion.

Back in Douala, Cameroon, Brueggergosman joins members of the Bassa community to learn Assiko (translated: ‘in contact with the earth’) dancing and struts her stuff on the street with several locals.

Notes Brueggergosman: “When I decided to come to Cameroon, I was embarking on a journey that sought to re-integrate me into a culture that my ancestors were essentially stolen from through slavery at the end of the 1700s.”

Elsewhere during her time in Cameroon, Brueggergosman visits the Bimbia Historic Slave Trade, a place in at which individuals re-enact some of the terrible atrocities that earlier residents went through during slavery.

“It just broke my heart,” says Brueggergosman of that experience. “I just felt less human. I felt less deserving. I felt guilty.”

While some tough images are presented, the power of music provides a shining light, as Brueggergosman beautifully belts out “Were You There When They Crucified My Lord,” before breaking into classics like “Amazing Grace” and “He’s Got the Whole World in His Hands,” the last of which is used in a magnificent montage featuring contributions from Brueggergosman’s band – Rob Piltch (guitars), Marc Rogers (bass), Davide DiRenzo (drums), Marko Simmonds (vocals) and Musical Director Aaron Davis (piano) – the Nova Scotia Mass Choir, as well as numerous Cameroonian choirs. This is really a sight and sound to behold.

Tune in at 10pm ET/7pm PT on Friday, February 26 for the conclusion of Brueggergosman’s splendid and joyous visit to Cameroon.

Looking to learn more about “Songs of Freedom” and Brueggergosman? If so, we can help you out right here.

To view musical performances from “Songs of Freedom,” please click on the photo below. 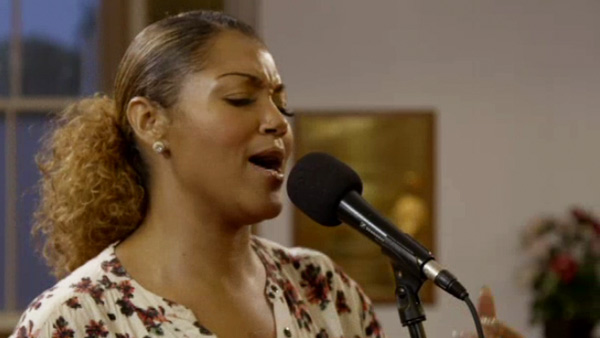