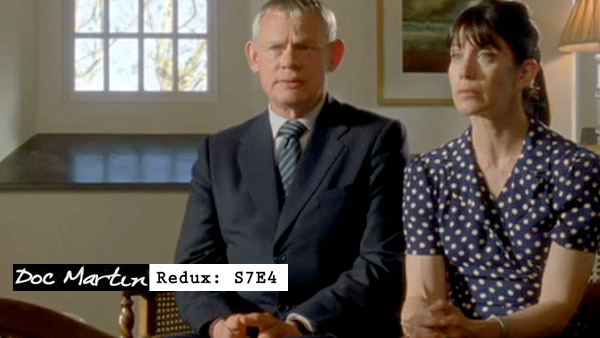 Enjoy our look back at the fourth episode of Doc Martin Season 7 but, beware, there are numerous spoilers ahead. You can watch Doc Martin S7E4 online through Thursday, January 14, 2016.

Sometimes, the truth hurts. But at other times, the cold, hard truth can serve as the starting point for a couple in desperate need of salvaging its relationship. In the world of Martin and Louisa, the latter proves to be the case.

After finally agreeing to participate in couples therapy, Louisa joins Martin and Dr. Timoney for a session. Right away, Louisa appears visibly uncomfortable as the therapist begins digging and chipping away at her relationship with Martin. Despite sitting very close to one another, Louisa and Martin look to be miles apart. Dr. Timoney picks up on this and suggests that the duo don’t act like a couple, nor do they share a reasonable amount of affection. Louisa doesn’t buy into these theories and tries to summarily dismiss them.

Zoning in on the distance Dr. Timoney sees in Louisa and Martin, she tells them, “If there’s to be the possibility of having a successful relationship, one must be able to express one’s appreciation of one’s partner.”

Very quickly, Martin chimes in and confirms, “I appreciate Louisa.”

When asked by Dr. Timoney if she believes this to be true, Louisa implies that Martin is a rather rude individual, without acknowledging whether or not she thinks Martin appreciates her. 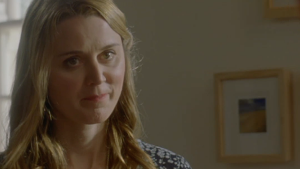 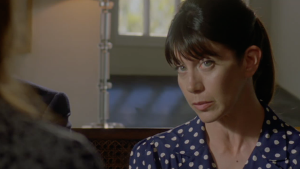 “He has no social skills whatsoever,” says Louisa of Martin. “He doesn’t suffer fools gladly, or at all. He makes no attempt to disguise his contempt for anyone he considers less intelligent than himself. And [he] considers everybody to be less intelligent…”

Instead of letting Louisa’s truth expand, Dr. Timoney gives the struggling couple some homework: embrace three times a day and state a positive about one another each time. Louisa and Martin uncomfortably agree to this.

Elsewhere in Portwenn, Bert is still reeling from the news that his love Jennifer will not be returning. Standing alongside his camper van, Bert burns up memories of her in a trash barrel.

Back at home, Louisa and Martin have their first go at Dr. Timoney’s homework assignment. As they embrace, Martin tells Louisa that he is happy she came back. Louisa is controllably happy with this revelation. Already, somehow, a breakthrough seems imminent.

Moments later, Louisa and Martin attempt a second embrace. As the two once again hold each other, Martin says he can’t let go. For a moment, it seems that Martin is getting past his emotionally distant ways and opening up to Louisa. There weren’t any romantic violins in the room, but they felt close.

Of course, this moment of awe is quickly slapped back to reality as Martin confesses he can’t move because his watch is caught on Louisa’s cardigan – so much for that near heart-warming moment. As awkward as that was, Louisa and Martin are slowly working toward a better bond. 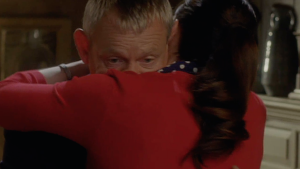 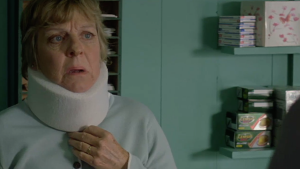 The other woman in Martin’s life (at least in her own mind), Mrs. Tishell, is going through a love life upheaval of her own. One day at the pharmacy, to her surprise, enters her estranged husband Clive. He’s left his job and wants to re-start a romantic relationship with Mrs. Tishell, as well as work with her at said pharmacy. Needless to say, she is a little more than apprehensive and angered by this. That said, Clive isn’t given the absolute boot.

Thanks to her own place of business, Louisa has been tasked with asking the doctor if he’d be willing to have one of her past students, Peter Conk, join him at the surgery for a one-week job shadow. To Louisa’s surprise, Martin gives the ambitious student a chance.

As Martin lays down the law and begins working with the over-zealous and eager-to-assist Peter, Bert is up to something. Now hidden away at Al and Ruth’s bed and breakfast, Bert refuses to let anyone in on his next move – including his son.

Meanwhile, Mrs. Tishell turns to Ruth for some advice with regards to Clive’s re-emergence. Ruth recommends a serious conversation be had between the two. Mrs. Tishell quickly heeds these words of wisdom and opts to give Clive a chance. However, he’ll have to first sleep on the couch.

While out on a house call with Martin, Peter foolishly tries to remove a cyst from the hand of the patient’s maid. However, smacking it with a thick book caused more harm than good, causing Martin to furiously send Peter to the car. 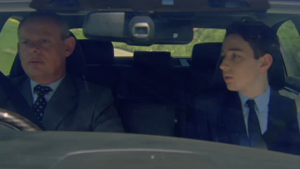 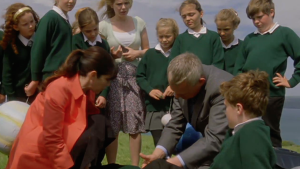 On a field trip, one of Louisa’s female students abruptly passes out and Martin is once again summoned to save the life of a child. On foot and running to the scene, Martin barrels over the class goody-two-shoes and discovers that the ill student has Kawasaki Disease – which can be fatal. She is subsequently rushed to the hospital for successful treatment and soon met there by her father. Martin, upset by the busy parent’s lack of symptom recognition, goes on to scold the poor bloke.

Now dismissed from his job shadowing experience with Martin, Peter returns home to find that his mother had taken a spill down the stairs. Upon arrival, Martin soon learns that Peter has been dangerously medicating his mother’s anxiety issues with prescriptions received from a shady, pill-hungry patient. Again, Martin becomes furious and wants young Peter disciplined by the authorities. Louisa, ever the one to try and see the good in people, winds up talking Martin down.

It is here that we see the growth Martin is experiencing and Louisa’s improving influence on his life. The old Martin would not have listened to anyone and would’ve slapped the cuffs on Peter himself if given the chance. Instead, he allowed Louisa’s common sense to make an impression on him.

After a stressful day of emergency after emergency, Louisa and Martin once again find each other in a heartfelt embrace. Yes, this is part of their homework, but here, it feels like the two are pursuing extra credit – from one another.

Are Martin and Louisa closing in on a legitimate reconciliation? That’s hard to say. While the two find themselves appreciating each other more, they still have an ocean of issues to ride through before they can drop anchor and stay in one place together. 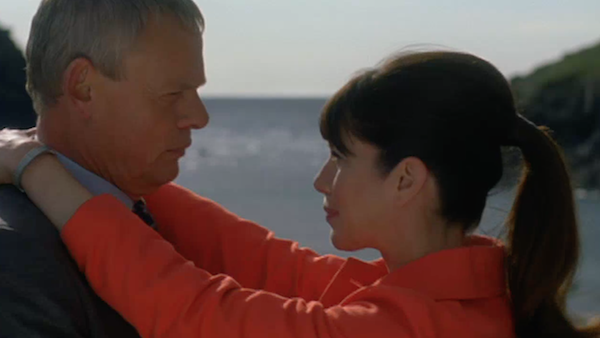