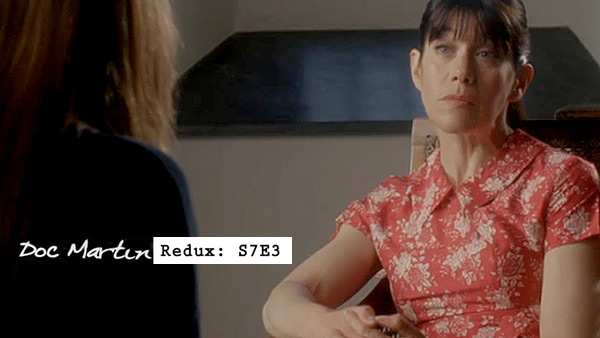 Enjoy our look back at the third episode of Doc Martin Season 7 but, beware, there are numerous spoilers ahead. You can watch Doc Martin S7E3 online through Thursday, January 6, 2015.

To say Martin is enjoying his new, less than modest living arrangement would be a full-fledged lie. After granting Louisa the space she desired as the pair work through their marital issues, Martin is struggling to find comfort in his new flat. Attempting to cheer him up at the new residence is Buddy, the cheerful Jack Russell that once belonged to Aunt Joan. The pup greets him early one morning, but Martin (as is the case with most mammals he comes across) has little patience to deal with him.

On the move, Martin pops in on Louisa without notice, catching her racing around the home in nothing but a bathrobe. She’s momentarily frightened, but quickly jokes that Martin had broken in. Not getting the joke, Martin’s seriousness once again leads the struggling pair into a few moments of palpable tension. To stop this from dragging out, Louisa politely finds a way to get Martin out the door.

As Martin and Louisa struggle to be in a room together, Bert is struggling to remain in Portwenn. With a businessman outside his door threatening to repossess restaurant materials to pay off debts, the elder Large is struck down by the contents of a letter. At a moment’s notice, Bert decidedly exits, telling the businessman to take it all, ending the life of his eatery.

Considering the difficulty Martin’s already had this day, the last thing he needed was Melanie from Radio Portwenn arriving at his practice and requesting that he appear on the airwaves during her station’s ‘Healthy Eating Week.’ Barely able to stomach her, Martin efficiently turns down Melanie’s request. 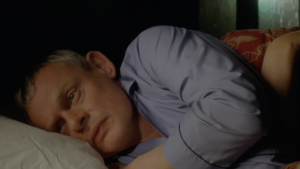 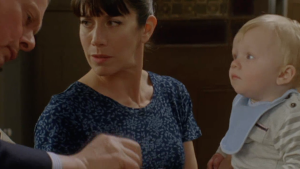 “Martin finds it very difficult to express his feelings. I know he loves me…at least I’m fairly sure he does,” relayed Louisa. “Anyhow, it’s no wonder he’s a little bit emotionally repressed. You should meet his parents. His dad is dead, so you can’t [meet him.] But, his mum is very cold and not dead.”

When asked to discuss her parents, Louisa is reluctant and evasive. Dr. Timoney persists, uncovering the facts that Louisa’s mother left her at the age of 12, while her father spent time in prison. Louisa is clearly uncomfortable reliving her past family life and tries to shift the spotlight back onto Martin.

After more than insinuating that the root of her marriage’s problems has to do with Martin, Dr. Timoney is sceptical.

“Is that how you view the state of your marriage?” Asked Dr. Timoney. “As Martin’s problem?”

Louisa doesn’t go as far as fully confirming that notion, but does acknowledge that her marriage is “a bit of a mess.” Dr. Timoney pushes for couples therapy, but Louisa sticks to the belief that Martin needs to get sorted out, by himself, first. Clearly, Louisa is frightened and vulnerable, fearing further judgment from Dr. Timoney.

Bert, still looking down about the mysterious letter he received, is seen by Ruth as he holds a suitcase and wears a sad disposition. Remaining vague about what troubles him, Bert notes that he’s going on holiday, but refuses to say where. 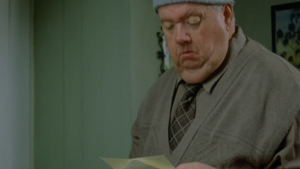 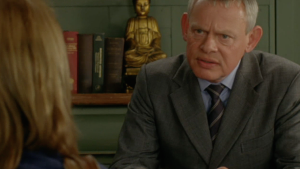 Fresh from her meeting with Dr. Timoney, Louisa confronts Martin about the couples therapy idea and whether or not he knew it was a possibility. Admitting that it was, Louisa gets upset and defensive, pushing the blame of the marriage’s failings onto the shoulders of the doctor. As he takes in this subtle lashing, he appears disappointed by Louisa’s refusal to work with him on the issues they have. For once, it appears that Martin is softening up and Louisa’s getting harder – it’s quite the role reversal.

Since Martin isn’t interested in appearing on Radio Portwenn, Morwenna convinces Al to go on the air with Melanie to discuss his new bed and breakfast. Al seems uncomfortable, but Morwenna offers the encouragement that only a girlfriend usually would. It appears as if she and Al are developing a new type of chemistry, even if neither is totally aware of it yet.

As stressed out as Al seems about his radio appearance, it doesn’t compare to the concern he has for the whereabouts of his father. He repeatedly tries to get a hold of Bert, but to no avail. Soon, Al turns to PC Penhale to help him out. Although the officer has his heart in the right place, he appears distracted by a new romantic interest in Janice.

With lots on his mind, Al appears on Radio Portwenn and is visibly thrown off by Melanie’s assumption that Morwenna is his girlfriend. Unfortunately, Al never recovers from that line of questioning and subsequently flunks the interview. 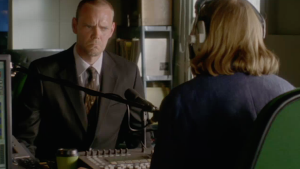 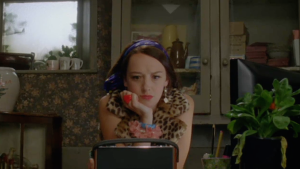 To transition into something more positive, Melanie introduces her teenage Goddaughter Ellie, who is set to play a song on the air. Ellie, still not recovered from her bout of strep throat, falls seriously ill when on the air. Martin, as expected, is summoned.

Shortly after getting to the station, Ellie stops breathing and Martin is forced to do an emergency tracheotomy that winds up saving the girl’s life. All of this drama is broadcast out to listeners, including Louisa, who can’t help but beam with pride.

“That’s your daddy!” Said Louisa while standing by the radio with James.

As Martin’s bout of heroism plays out, Al tracks down his father and learns that his love Jennifer will not be returning from Blackpool. Bert is crushed by this, but puts on a resilient face and attitude for Al, who is still reeling from his radio debacle. Together, the two sit and look upon the beautiful landscape with the hope that brighter days lay ahead.

Seemingly impressed by her husband’s heroic actions, Louisa tells Martin that she’s now willing to join him in therapy. Pleasantly surprised by this, Martin appears relieved that the woman who possesses his heart is willing to pour hers out.

Once the two part ways, there is a feeling that a reconciliation is getting closer, but it’ll take a lot of work and patience for both Martin and Louisa to accept and work on each other’s flaws. Knowing Dr. Timoney as we do, don’t expect her to let Martin or Louisa to skate through the process of couples therapy. Chances are, things will get tougher before they get better. 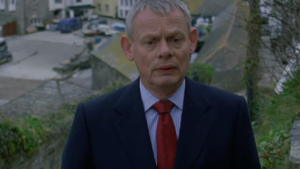 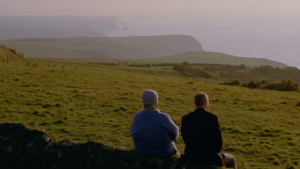