Cast Your Vote! Which Doc Martin Villager is the Most Popular? 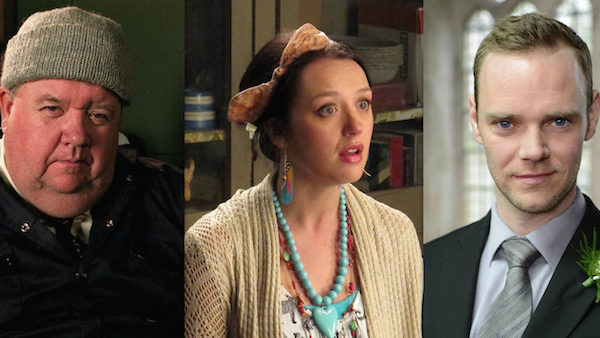 Since 2004, the razor-tongued, largely anti-social Dr. Martin Ellingham has gradually evolved into one of the most applauded characters on British TV. He’s a doctor that fears blood; a man that continuously struggles with love, and a person that’s just awkward enough to be somewhat endearing.

Then there’s Louisa Glasson, the woman who returned home to Portwenn as an adult and surprisingly fell for a man with such a challenging disposition. On again, off again with Martin, Louisa and the doctor have a complicated bond that now involves a rocky marriage, a young child, plus a desire to right their ship.

Surrounding Martin and Louisa in the village of Portwenn is a loveable cast of characters that keep audiences enthused, in-stitches and emotionally engaged.

Take Bert Large, the heavyset, kind-hearted plumber and restaurant owner who single-handedly raised his son, Al, following the premature passing of his wife Mary. Large is also a mighty prankster who likes to playfully get the best of Martin. When not joking around, Bert looks for opportunities to shine and takes the lumps in stride even when things don’t go according to plan.

Then you have Ruth, the direct and to the point psychiatrist aunt of Martin. Stepping in after the passing of Aunt Joan, Ruth is the doctor’s true confidant and in many ways plays the role of a motherly figure. Considering how awful Martin’s biological mother Margaret is, Ruth plays a crucial, admirable role in his life.

As much as you may love the entire cast of “Doc Martin,” (which we can’t blame you for!) we’d like you to help us rank the villagers so that we can find out which one stands head and shoulders above the rest.

To keep things from becoming a landslide for Martin and Louisa, they’ve been held out of this competition. It’s nothing personal; we would just like to shine a brighter light on their brilliant counterparts.

Below, all you need to do is click either the ‘up’ arrow or ‘down’ arrow at the left side of each photo, indicating your feeling for each individual. Characters with more positive ‘up’ votes than negative ‘down’ votes will rise to higher positions on the list.

Have fun and thank you for participating!